Be Wary, Borrowing from Your Family’s Private Corporation Could Come with an Unexpected Cost 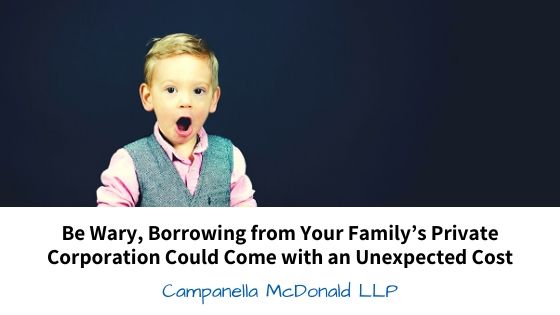 It happens often. You’re strapped for cash, so you hit up your brother/sister/mom/dad for a loan. It’s perfectly legal and perfectly normal.

In a recent Tax Court of Canada case on July 8, 2019, the CRA had reassessed a taxpayer to add loans received from a corporation controlled by her brother and his wife to her income.

Why did they do this?

The Income Tax Act has special rules that apply to loans advanced from a Canadian corporation to a shareholder or “connected person” (this includes related individuals). In effect, these rules can lead to an income inclusion in the hands of the borrower if the loans are not repaid by the end of the corporation’s year following the year in which the loan was advanced.

In this case, the court handed out punitive punishments.

The court felt that the taxpayer was negligent in avoiding obtaining appropriate tax advice with respect to the series of loans advanced between 2009 and 2012. The court allowed the CRA to reassess each of the taxpayer’s years in respect of the loans and add the amounts to her income. This was beyond the ordinary three-year reassessment period.

Effectively the loans were converted to taxable income for the taxpayer.

So how do you avoid this?

First, talk to your accountant and get advice whenever forwarding “loans” to related individuals. A plan can be documented to avoid the pitfalls if planning is sought out before the loans are made.

Failure to comply with related party rules when dealing with private corporations can land you in hot water.

Further to this, the Liberal government has implemented the Tax On Split Income rules (TOSI) to prevent what they believe are unfair income-splitting advantages that owners of private corporations have had for years.

This has increased the complexity of tax reporting across the board for small business accountants and their clients.

We aren’t yet sure how the CRA will audit and enforce these rules but we can speculate that they will likely take a hard stance on the application of the rules, especially in situations where they feel the taxpayer has received an unfair advantage, or where the transactions do not reflect a true business transaction.

Campanella McDonald LLP has worked with thousands of private corporations and individuals since 2010 and helped them devise tax plans to meet their personal and business needs.

If you have questions about how tax laws affect your private corporation feel free to contact us for a no obligation initial consultation.