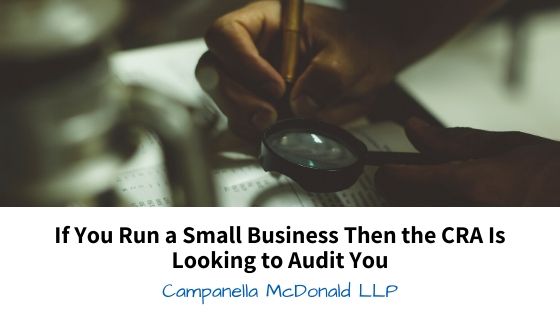 As legend goes, Willie Sutton, the notorious bank robber, was asked by a reporter why he robbed banks. His answer was simple, “because that’s where the money is.”

Well, it looks like the CRA has caught on to that logic. Albeit, not with banks, but with small to medium-sized businesses.

According to CRA officials speaking at the Canadian Tax Foundation’s Ontario Tax Conference held in Toronto in late October 2019, the CRA managed to find a whopping $1.185 billion from audits of small and medium-sized enterprises (SMEs) last year. That’s an incredible number, and likely a massive return on investment for the CRA’s audit division.

These figures represent “identified” amounts, not necessarily collected amounts. Some additional statistics from the disclosure:

In addition, the CRA clarified much of their audit selection process, emphasizing their use of several techniques to weed out potential audit targets including standard requests for additional information when a business’s numbers don’t line up and their continued use of indirect verification of income (IVI).

IVI is of particular importance as the CRA employs many techniques to verify small business owner’s income when their lifestyle and reported income don’t match up.

For example, the CRA may:

When your personal numbers don’t line up with your business numbers, they will look deeper to see what your sources of income actually are. The CRA commented that they have been broadly concentrating on unreported income, capital transactions, corporate reorganizations and restructurings, ineligible expense claims, and related-party transactions. More specifically they have been looking closely at cryptocurrency transactions, real estate “flipping,” and the underground economy in general.

The audit landscape for SMEs has changed drastically over the past decade. The CRA has become more sophisticated and noticeably more aggressive in their application of the law and the techniques they apply during audits. In addition, it is becoming more and more expensive to hire qualified accountants and lawyers to represent you should you be selected for audit simply because the auditors are going into such detail. Our recommendation is to take the time to report your income properly, obtain professional advice annually, and limit your expenses to actual business expenses.

At Campanella McDonald LLP we help hundreds of small business owners like yourself properly structure their businesses to optimize their tax savings. Give us a call today and we will book an introductory meeting to get you on the right path to growth and tax savings.