If You’re a Contractor Doing “Cash” Deals With Your Customers, Then The CRA Has Their Eyes On You 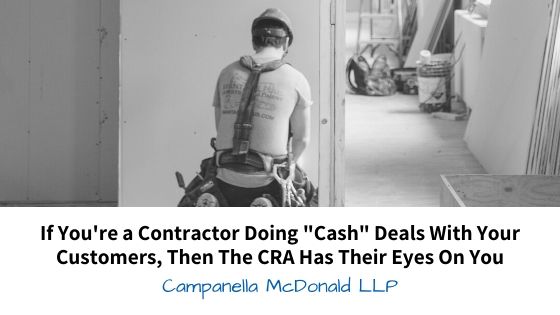 In case you haven’t noticed, the Canada Revenue Agency (CRA) has upped its audit game significantly.

Facebook, Twitter, informants, and now, according to the Financial Post: “In July, using what is known as the “unnamed person requirement” (UPR) found in the Income Tax Act, the CRA obtained a Federal Court order compelling Home Depot to disclose the identities… commercial customers and the total annual amount spent by each customer between January 1, 2013, and December 31, 2016, at its 182 Canadian stores.”

In fact, the residential construction industry accounts for 26.6% of the 51.6-BILLION-dollar underground economy according to a report issued by the CRA in 2018.

How does it work?

In many cases, contractors working on residential properties are dealing with end consumers who are not able to take tax deductions for work on their homes.

In order to avoid sales taxes and negotiate better deals, they work out “cash” based compensation with their contractors.

This allows the customer to avoid sales tax (i.e. HST in Ontario of 13%) and often negotiate a discount on services as it is implied that the contractor won’t record the sales on their tax return and thereby avoid paying income tax.

The fix, in my opinion, is easy, go straight to the source: Home Depot.

Home Depot is a massive retailer whose stock is publicly traded. They keep meticulous records of all transactions conducted with contractors who register with them.

It’s really a matter of getting the data and connecting the dots.

Because there are literally BILLIONS of dollars of undeclared income at stake my guess is that the CRA will have a field day with this.

The CRA has lately been taking a hard stance on taxpayers attempting to circumvent tax laws and has upped their audit game.

Attempting to avoid taxation by legitimate means (maximizing legal deductions, using corporations to defer tax and income splitting with family members who actually work for you) is completely fine.

However, failing to report your income, or avoiding tax by dealing in cash is at best negligent, at worst, fraudulent.

There are many legitimate ways to maximize your after-tax earnings and all avenues should be exhausted.

In addition to the negative tax consequences of paying cash for your renovations, there are other serious non-tax considerations such as insurance, WSIB, the legality of workers, legal liability, etc.

At Campanella McDonald LLP we have helped hundreds of contractors, property renovators, fix-and-flippers, and real estate investors maximize their after-tax income since 2010.

In fact, our partners have participated in several of these businesses themselves over the years and offer consulting services to businesses and individuals involved in these types of transactions.

If you have questions about your real estate venture don’t hesitate to give us a call, we’d love to help.